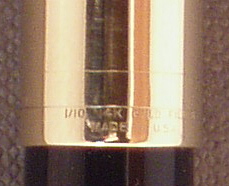 Smooth Gold Filled Cap with gold filled clip.  No pattern except two etched lines for a cap band.  Gold content underneath the etched band.  Found with aluminum jewel.  The original finish on these caps was a brushed finish, and then lacquered, leaving the space within the two etched lines shiny.  The finish did not last long and the caps acquired a shiny finish throughout. A second version is found with gold content at top near the clip.

Smooth Gold Filled Cap with gold filled clip.  No pattern except one etched line for a cap band.  Gold content up by the clip.  Found with aluminum jewels.

Gold filled Cap with unusual line pattern that does not go the whole lenght of the pen.  Found on a red band demonstrator dated 1946.  Probably a model shop prototype cap.

Gold Filled Cap with gold filled clip, with pattern of closely spaced lines all around.  Note the “Parker” on the band, unlike the earlier Blue Diamond caps.  Found on 1947 to 1948 Parker “51” vacumatic filler pens, single and double jewels.

A previously unknown Solid Gold 14k cap with a smooth/no pattern finish and 14k clip.  Before this cap was found, the smooth 14k solid gold caps had only been seen with the blue diamond clip.  This cap has the plain arrow clip and “Parker” on the cap, which would make it correct.  In addition, it has the normal tab under the clip, found in all plain arrow caps.